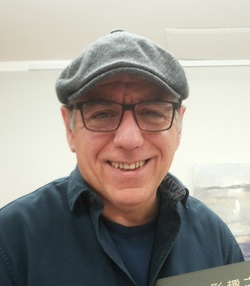 Francesco Fontana is a professional artist with many years of experience in oil, watercolor, acrylic, and dry media. After art school, he followed a bohemian dream and started his artist journey in bohemian Paris, making a living by drawing tourists’ portraits. In the years to follow, he exhibited his art in Italy and France and his paintings are now in many private collections in Europe, the USA, and Asia.

Before becoming a full-time painter, Francesco worked as a graphic designer and illustrator for international cultural events such as theatre, classic music, jazz festivals, and symphonic orchestras. Other specialty works include large watercolor renderings for major architectural projects in the Middle East.

Since 2008 Francesco is the co-founder and director of Fare Pittura Atelier, based in Milan Italy, where he teaches regular classes, of watercolor, oil, and life drawing. He travels extensively as a workshop instructor and presenter. Frequent painting destinations include Provence, Paris, Giverny, Normandy, Sicily, Umbria, Puglia – Invitations include Bali, Indonesia, and the USA.

He’s a stage and field faculty member at the Plein Air Convention & Expo in Monterey, CA, and Tucson, AZ also exhibiting in the expo space. Exhibited in the 148th American Watercolor Society in New York’s Salmagundi Club and at International Watercolor Society’s International Meeting in Fabriano, Italy. He’s the juror, lecturer, and workshop leader for the fall convention of the Watercolor Society of Oregon in 2016. Appearances in the press include Plein Air Magazine and Fine Art Connoisseur, The Artist — UK. His DVD ‘Watercolor the Italian Way — The Alla Seconda Method’ was released in 2016 by leading publisher Liliedhal in the USA.

Francesco received his BFA in Palermo, Italy where he was born. He extended his education with further years of study with Italian Masters such as Maiotti, Lissoni, and Pelizzoni. Later he met several International artists who broadened his technique and vision remarkably. Francesco has started his career in Paris, has lived in London, and is fluent in English and French as well as his native Italian. He’s the loving father of two little girls: Teresa and Flora.

Tuscany is located in central Italy and stretches from the Apennines to the Tyrrhenian Sea.
Its landscape, artistic heritage and stand-out cities – first among them Florence – make Tuscany an unquestioned protagonist of international tourism. In this region, nature has many different facets, starting from the coast that alternates long and sandy beaches, like the Versilia beach, with rocky cliffs and steep headlands. The islands of the Tuscan Archipelago, surrounded by Mediterranean vegetation, a crystal-clear sea and rich seabeds, are peerless.

You can admire sceneries of uncontaminated nature in the Apuan Alps and in several protected areas, such as the Orbetello Lagoon, home to many species of migrant birds, including pink egrets.
However, the most typical sceneries of the region are those that merge the beauty of nature with the millenary work of man. The amazing Gulf of Baratti and the sites of Vetulonia, Vulci and Pitigliano guard necropoli and vestiges of the Etruscan civilization, while Roselle and Cosa evoke memories from the Roman Age.

Medieval villages, historical towns, castles and defense systems, country churches (the so-called pievi) and beautiful abbeys, like the one of Sant’Antimo, are scattered all over the territory and their profiles stand out in the landscapes of the Crete Senesi, Orcia Valley, Garfagnana, Chianti and the Maremma.
Finally, Tuscany is full of spas: Montecatini, Saturnia, Montepulciano, Monsummano and Bagno Vignoni, which offer relaxing holidays thanks to their thermal waters and well-equipped facilities for all types of treatments.

This website uses cookies to improve your experience while you navigate through the website. Out of these cookies, the cookies that are categorized as necessary are stored on your browser as they are essential for the working of basic functionalities of the website. We also use third-party cookies that help us analyze and understand how you use this website. These cookies will be stored in your browser only with your consent. You also have the option to opt-out of these cookies. But opting out of some of these cookies may have an effect on your browsing experience.
Necessary Always Enabled
Necessary cookies are absolutely essential for the website to function properly. These cookies ensure basic functionalities and security features of the website, anonymously.
Functional
Functional cookies help to perform certain functionalities like sharing the content of the website on social media platforms, collect feedbacks, and other third-party features.
Performance
Performance cookies are used to understand and analyze the key performance indexes of the website which helps in delivering a better user experience for the visitors.
Analytics
Analytical cookies are used to understand how visitors interact with the website. These cookies help provide information on metrics the number of visitors, bounce rate, traffic source, etc.
Advertisement
Advertisement cookies are used to provide visitors with relevant ads and marketing campaigns. These cookies track visitors across websites and collect information to provide customized ads.
Others
Other uncategorized cookies are those that are being analyzed and have not been classified into a category as yet.
Save & Accept
Powered by